A Florida restaurant received viral attention over the weekend after it shared a photo of a door display to Facebook that reminded customers it does not require masks upon entry. 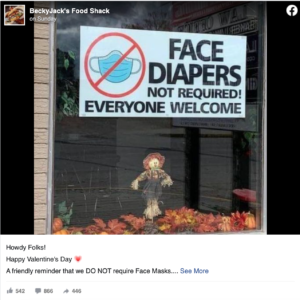 The post also included an image of a door hanger in a window that reads, “Face diapers not required! Everyone welcome.”

“We did a post just trying to be proactive letting everybody know what the mask requirement is or isn’t at Beckyjack’s because some people were coming in they were surprised that we weren’t wearing masks,” owner Jesse Fox said in an interview with WFLA.

Once the image began receiving attention, the restaurant shared another post on Facebook, telling its customers that it will always “strive to be transparent.”

“Yes we do not require facemasks and yes we think of them as diapers,” the restaurant’s Facebook page stated in the post. “We strive to be transparent. And to our friends.. unfriend us now because being our friend will hurt you.”

“We’re getting a ton of feedback both positive and negative,” Fox said. “I don’t feel like I am going against the grain. I feel like I’m using common sense.”

We Have the Documents: Here’s How Many Times Clinton Flew on Epstein Jet in...