‘This could disable the president and his top advisers’: White House staff say they were hit by Havana syndrome as former National Security Adviser John Bolton warns it could be used as weapon of war.

60 Minutes will air a special on Sunday featuring Bolton who corroborated those reports and warned about the potential implications of the illness, which is thought to be caused by a mysterious weapon.

‘If we were at war and an adversary could disable the president and his top advisers, or commanders in the field, it could render us extraordinarily vulnerable,’ Bolton said in the 60 Minutes’ segment.

‘We don’t know that that’s the threat we’re facing. But I would much rather focus on finding out the answer now, rather than finding out later when it may be too late.’

According to 60 Minutes, a number of Homeland Security officials have reported experiencing vertigo, confusion, and memory loss during their tenure under the Trump administration.

It is not known who these officials are, but they will share their experiences on CBS’s flagship current affairs program on Sunday.

Bolton, who served as the nation’s national security adviser, is deeply concerned about these illnesses.

Symptoms closely resemble those of the mysterious Havana Syndrome, which was thought to be caused by surveillance equipment or a mysterious sonic weapon. 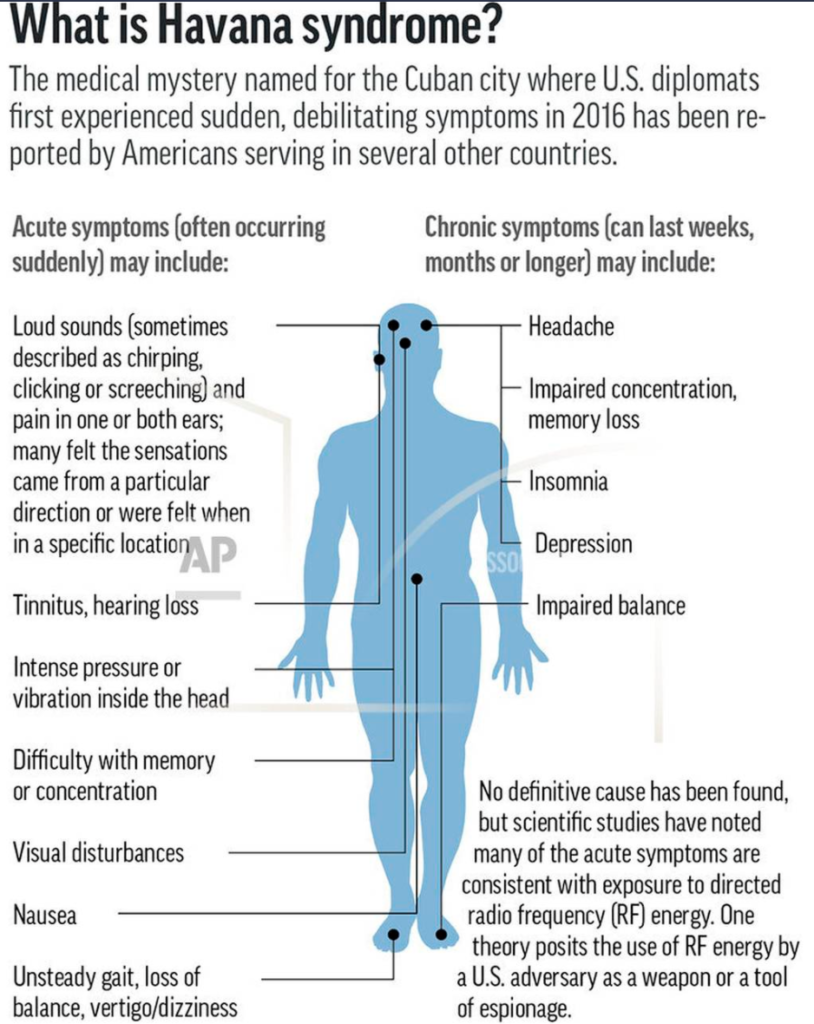 Former National Security Adviser John Bolton says that the mysterious disease is a threat to the highest levels of the U.S. government. Last month, a CIA task force said the illness is not the result of a campaign by a hostile power to target U.S. diplomats and spies.

State Department security officer Mark Lenzi, who worked at the American Embassy in Guangzhou, China, opened up on 60 Minutes in 2019 about the long-term symptoms he has been experiencing.

‘The symptoms were progressively getting worse with me,’ said Lenzi back then. ‘My headaches were getting worse. The most concerning symptom for me was memory loss, especially short-term memory loss.’

Investigators have had difficulty finding answers as to what is causing the symptoms, according to CIA director William Burns.

‘It’s a very complicated issue, you know, dealing with a whole range of incidents which have… different kinds of explanations for them as well,’ Burns stated. ‘It’s a very charged issue emotionally as well. I understand that very clearly. And that’s what… makes me even more determined not only to ensure people get the care that they deserve but also that we get to the bottom of this.’

Scientists and authorities don’t yet know who might be behind the attacks or whether the symptoms could have been caused inadvertently by surveillance equipment or whether a mysterious sonic weapon was used.

Its existence is, however, doubted by some, who call it mass hysteria.

Researchers believe that Russia’s Cold War-era invention of a device that gathered information from laptops and cell phones was used to spy on American embassies as the cause of the suddenly appearing syndrome.

Experts now speculate, however, that a hostile power – like Russia or China – could have adapted this microwave technology for weapon use.

According to their respective governments, neither country had any involvement in the mysterious syndrome incidents.

Due to a ‘anomalous health incident in Hanoi,’ where the Vice President was taking part in her Asia trip, Kamala Harris’ departure from Singapore had been delayed by over three hours back in September.

Havana Syndrome was meant by that.

When he fell ill at a G8 conference in Germany in 2007, former President George W. Bush was also speculated to have developed Havana Syndrome.

As Laura Bush described in her 2010 memoir, “Spoken from the Heart,” both Bush and Laura Bush experienced nausea or dizziness at the meeting. Some of their aides also had difficulties hearing and maintaining balance.

It was officially attributed to a virus at the time. Although some speculated they might have been poisoned.

The Examiner suggests that Russia was behind the attack.

Microwave emissions are believed to cause Havana Syndrome, and Moscow has used RF/MW capabilities since the Cold War. In the Cold War, the Soviets for unknown reasons repeatedly bombarded the US embassy in Moscow with low-level microwave radiation – known as the Moscow signal.

Three US diplomats in Geneva and one in Paris were among the latest to be diagnosed with the mysterious illness, ‘Havana Syndrome,’ with one rushed back to America.

U.S. diplomats at the diplomatic missions in Geneva and Paris came down with ailments related to Havana Syndrome last summer -a mysterious illness thought to be caused by surveillance equipment or a mysterious sonic weapon.

As the Wall Street Journal reported, at least one American serving in Geneva had to be medevacked to the United States for treatment.

During a town hall meeting, the mission’s leadership informed staff about the incident.

WSJ reported that a similar incident took place in Paris when senior embassy officials emailed diplomats about a suspected case, encouraging others to report any unusual symptoms.

As a result of the new reports, U.S. Secretary of State Antony Blinken said that the entire federal government is working to determine the origin of the illness.

U.S. and Russian security talks were underway on Monday where both Geneva and Paris were affected by the incidents.